Once my ex-boss told me, as they started the company back in the ’90s they had to buy a computer, so they took a big bunch of credit and bought an SGI workstation. For that price you could buy a new car back then.

As i started my career in 2009 the car industry almost finished the long process of adopting standard Wintel PC-s. I have experienced the last days of an era, there were of sad piles of blueish boxes in a corner of the office. Unix workstations were already “alien” in 2009. While they ran our CAxx programs like a champion, the learning curve was steep, the UI and the inner workings under the hood had uncommon features and the platform started to show already its age. Of course everybody tought it is a good idea to throw them out. And frankly mechanical engineers cares only about their CAxx stuff, not the iron running them. In the same time the companies could spare whole bunch of money with switching to Wintel, so why not?

Me trying to acquire a Unix workstation

While it was already a dead platform, i still had some exposure to UNIX workstations, On the next desk beside me was a huge CRT monitor, and some black box under the desk. Once my collegue rolled his chair to it and switched the monitor on. I was surprised: “Is this thing on?” - asked him. It was idling beside me for 3 years (and probably much more), and i never noticed it is on.

Yes, we can’t shut it down, we forgot the root password, and the standard user have no rights to shut it down.

He then went to our message board which was buried under thick layers of pizza and other delivery service flyers. Under them, there was a piece of paper with the user credentials. He logged in, started CATIA v4, made some changes in a facelift project, then ftp’d the files back to his (Wintel) computer. Our boss walked around, and said:

We should switch this thing off.
Are you sure?
Yeah, we don’t need it anymore.

So i watched as my collegue trying to shut the machine down peacefully, but no dice, the user still had no right to shutdown, so at the end we pulled the cord. It was an IBM Power 275 (if i remember correctly), running AIX with CDE.

In germany the mother company scrapped big racks full with SGI blades used for FEA calculations, also many SGI Fuels with an iconic TFT monitor, it had transparent plastic housing just like the old iMacs, but i can’t seem to find any pic about it, maybe it wasn’t SGI product?

I was unable to acquire any of them.

After many years as my life got back in track i tried to source an SGI workstation, but during the years the prices inflated exponentially, so i decided not to invest into it.

I always had interest in operating systems because that’s the surface wich allows us to interact with the hi-tech sand, so i always wanted to experience IRIX as it is a proper propertiary UNIX, not kind of ductape work. Sadly one need an SGI machine to be able to run IRIX on it.

After many years of waiting i got aware of the fact that it is possible to emulate IRIX with MAME. Nice! So a new adventure started!

It is pretty straightforward to get MAME working on your computer, prebuilt executables are provided for the major operating systems, but they have no use for me.

First i had to build it’s dependencies, and MAME itself. After many hours of patching and fixing the source code (i call it mostly as “unixism”, where you write a non-portable linux-specific code and guards it with #ifdef __unix__, which is obviously a lie, but the whole computer industry is a joke factory, so whatever) i got MAME built.

First step is to install MAME, you can download a prebuilt binary from the MAME webpage or from your package repository, i use the latter. Now i am using 64 bit Haiku, thus some of the listed command are Haiku specific, if you want to follow this guide, research how to use the tools your OS provides. 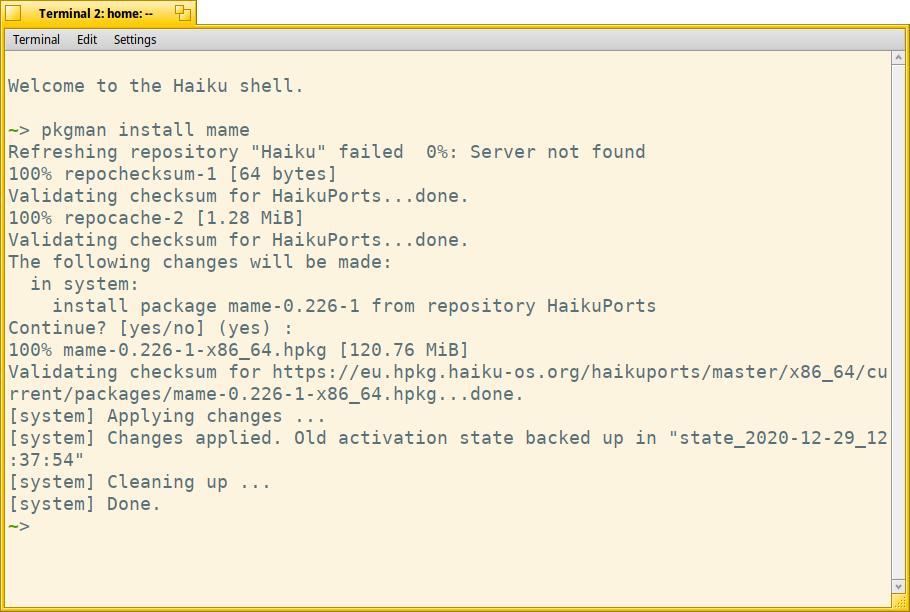 As you can see MAME 0.226 gets installed. You should use always the latest version.

We don’t have to extract this file, MAME can read zip files too.

Also we would need the install media, but to spare some time we would use a diskimage with preinstalled IRIX 6.5, called irix65.chd. You can find all the required files on the internet.

Then create a folder (i used /boot/home/Desktop/IRIX), and put the following files inside it:

To start MAME i used the following command line:

This command instructs MAME to use the indy_4610 firmware files, use xl24 graphics and use windowed mode (this can be useful later). If we start MAME now it will great us: 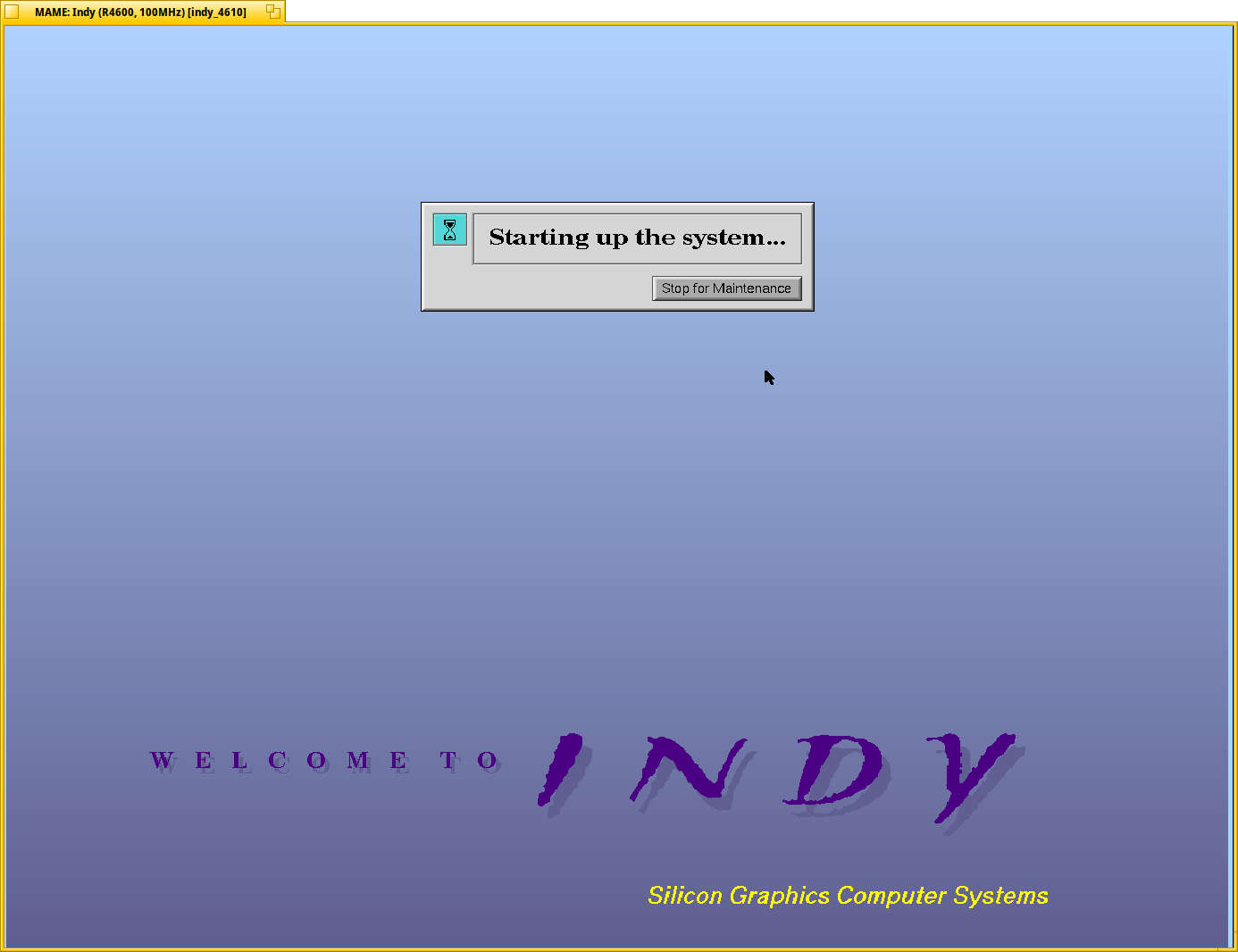 IRIX needs a MAC address associated to a network interface, but currently it is unavailable, so we have to add it manually, so let’s press the Stop for Maintenance button: 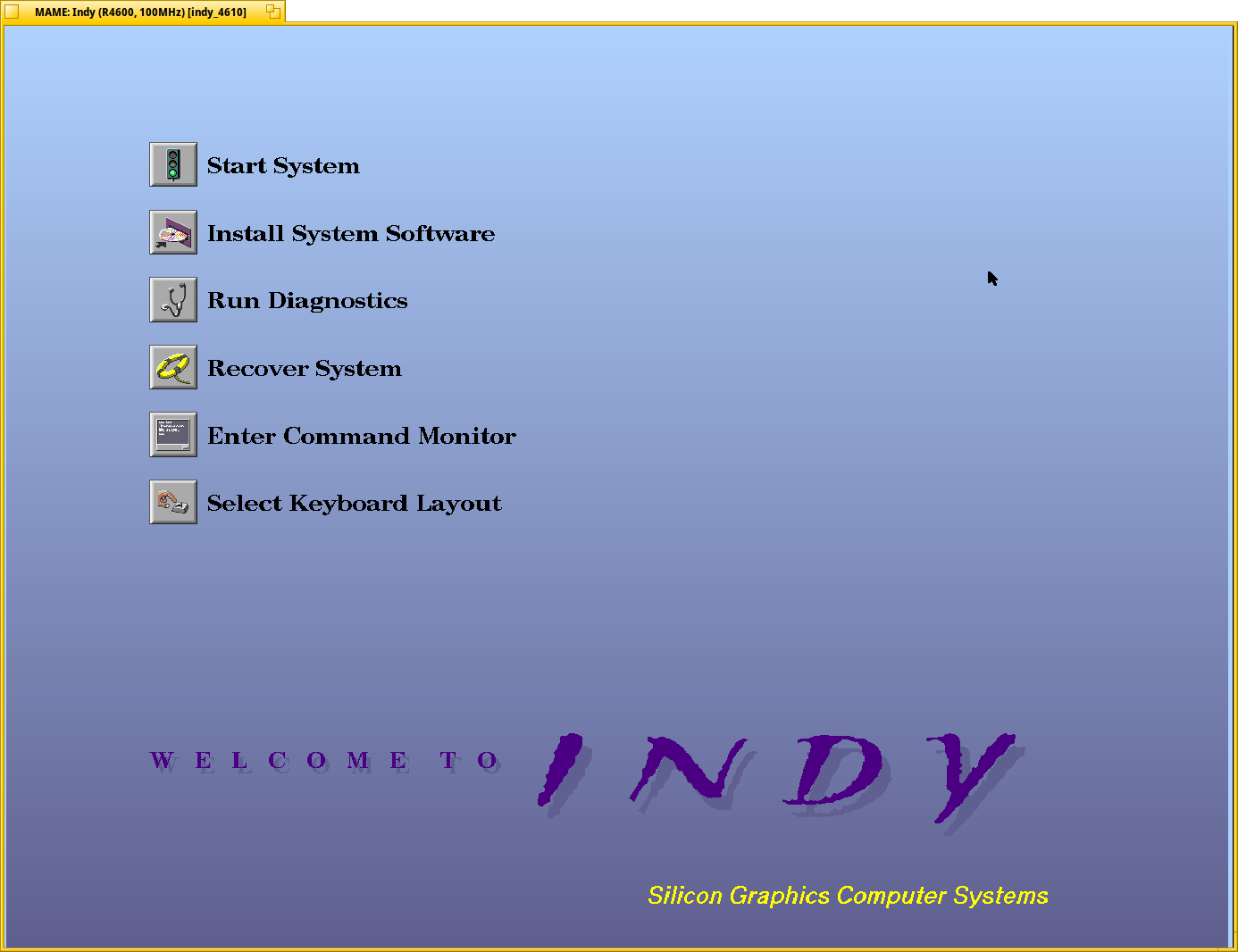 And enter the Command Monitor: 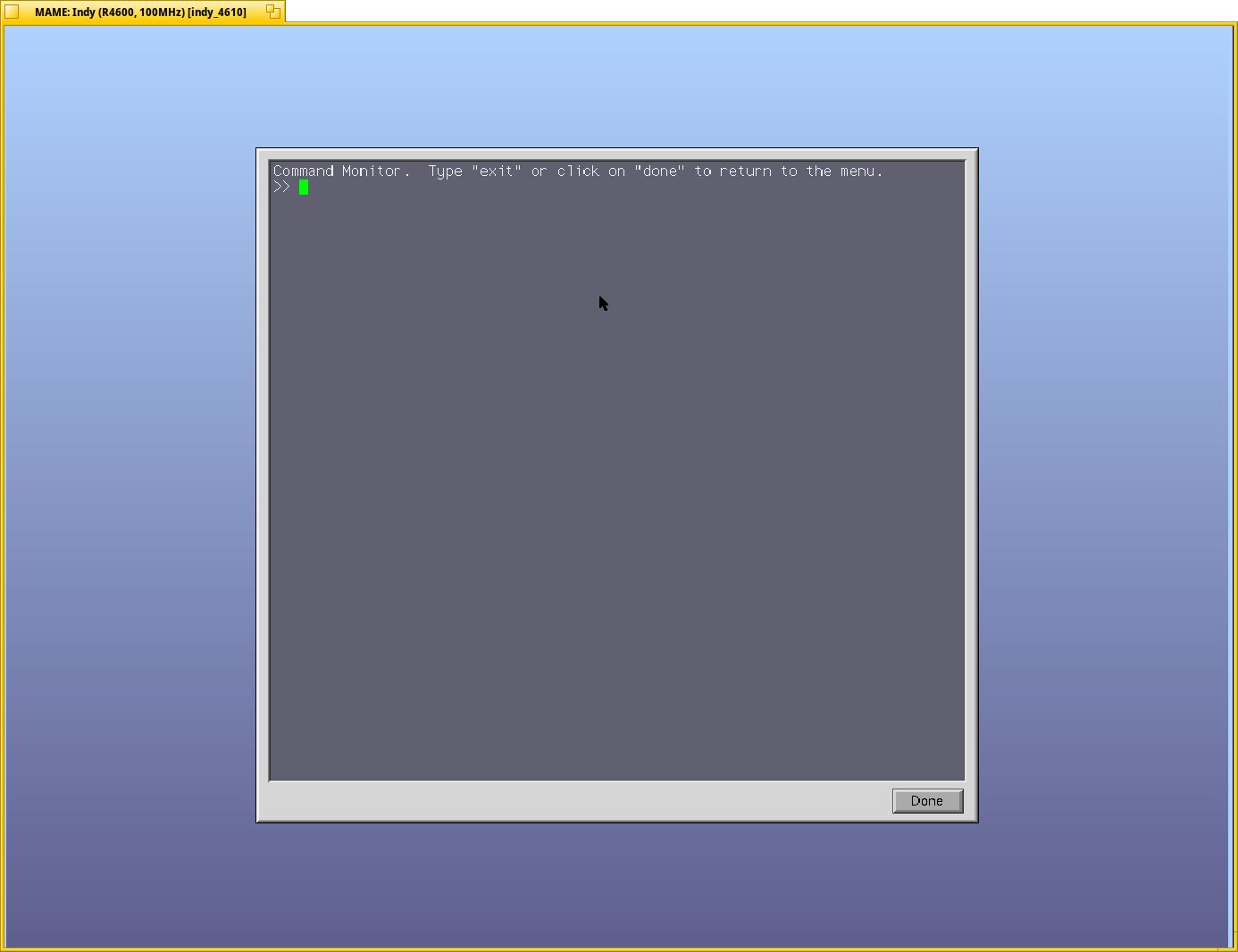 To set the ethernet address use the following command:

And continue the boot process: 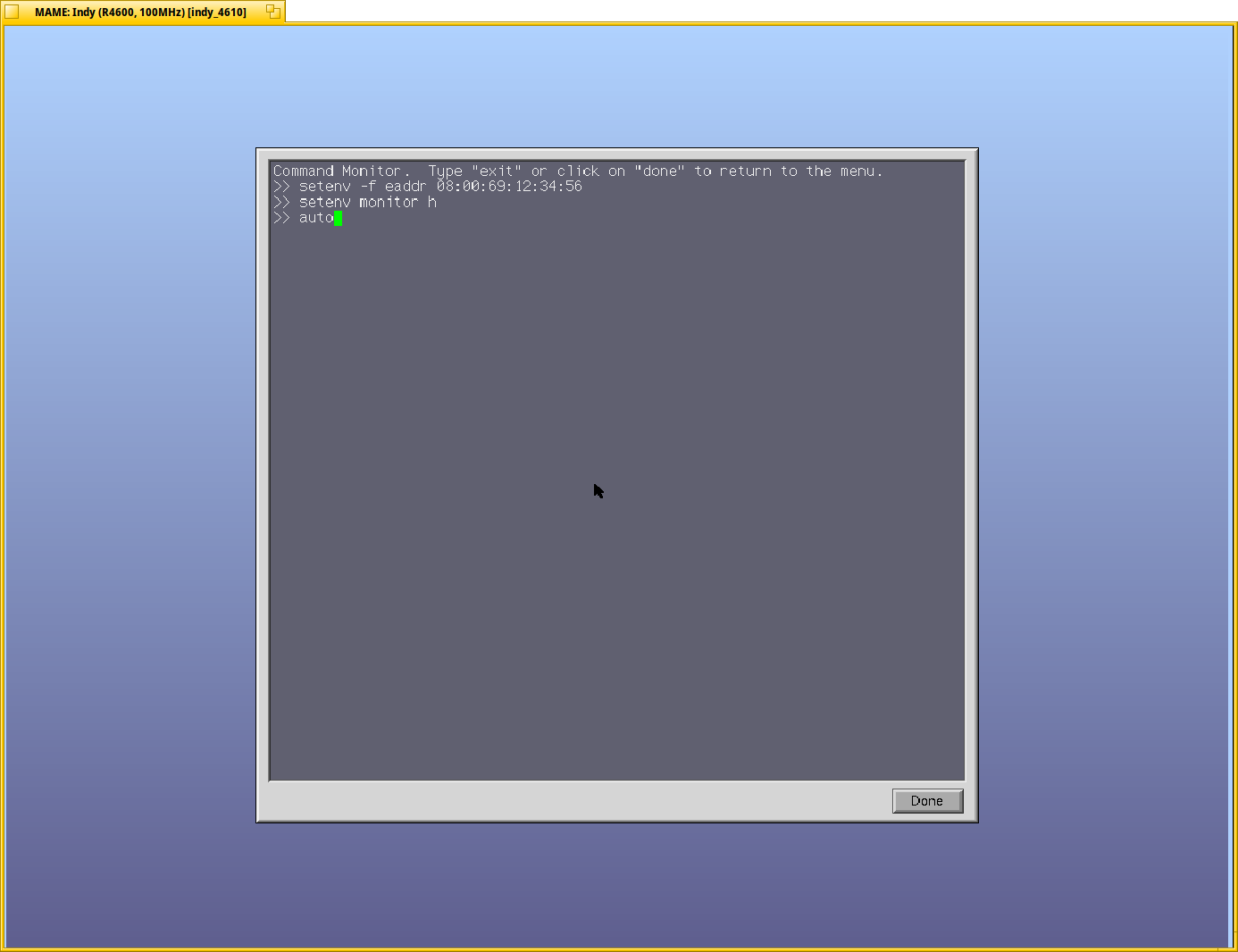 The system starts up: 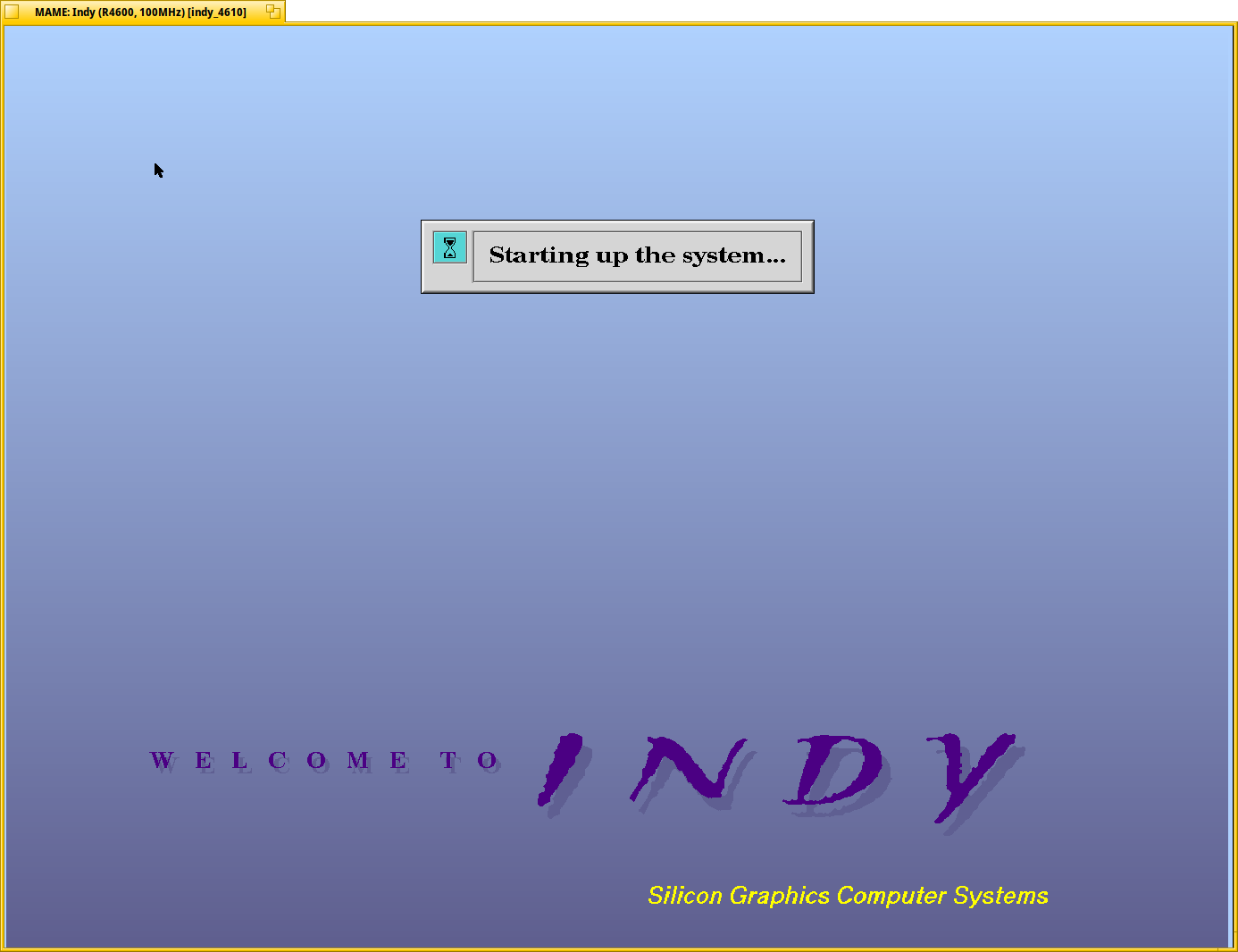 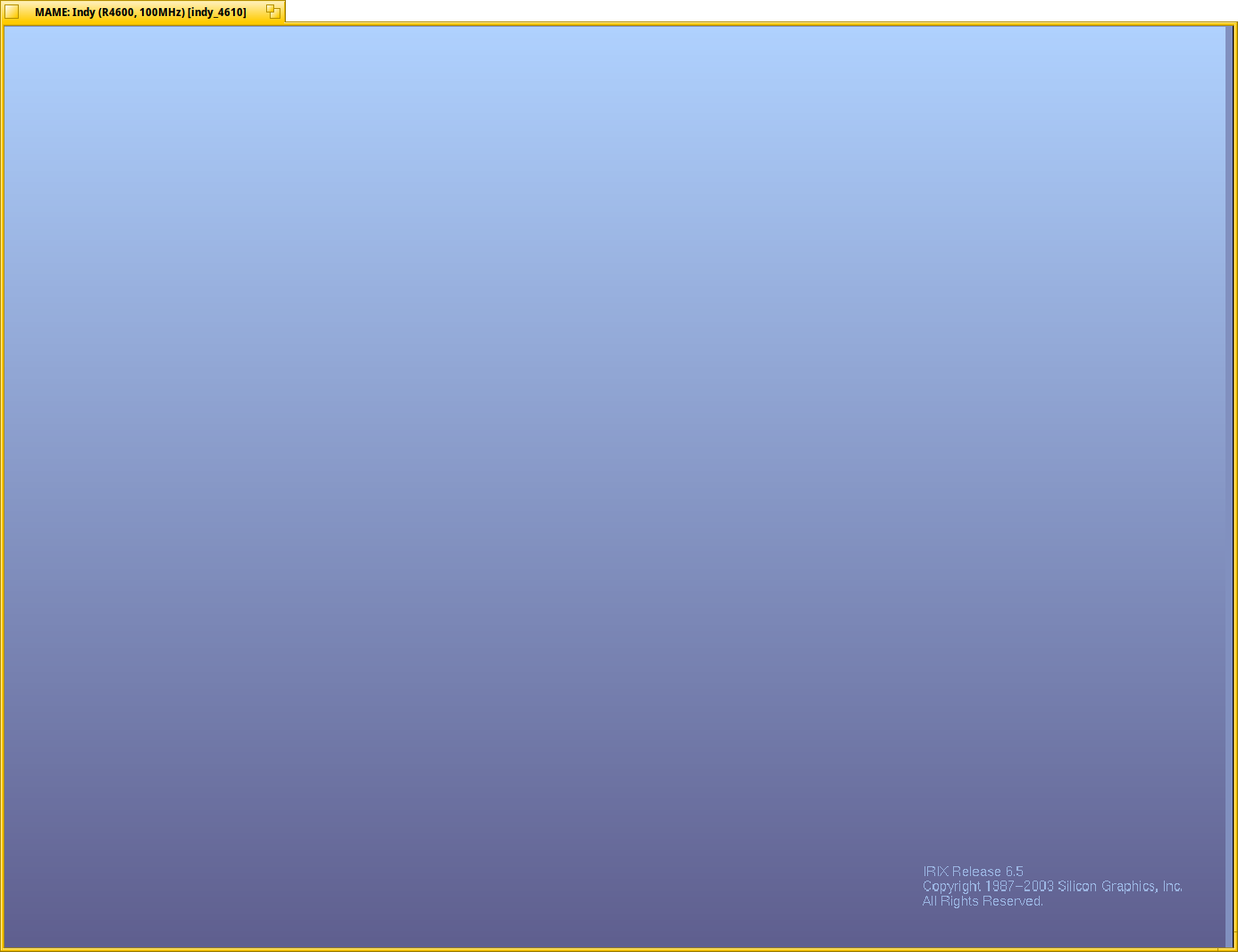 Every OS should print this: 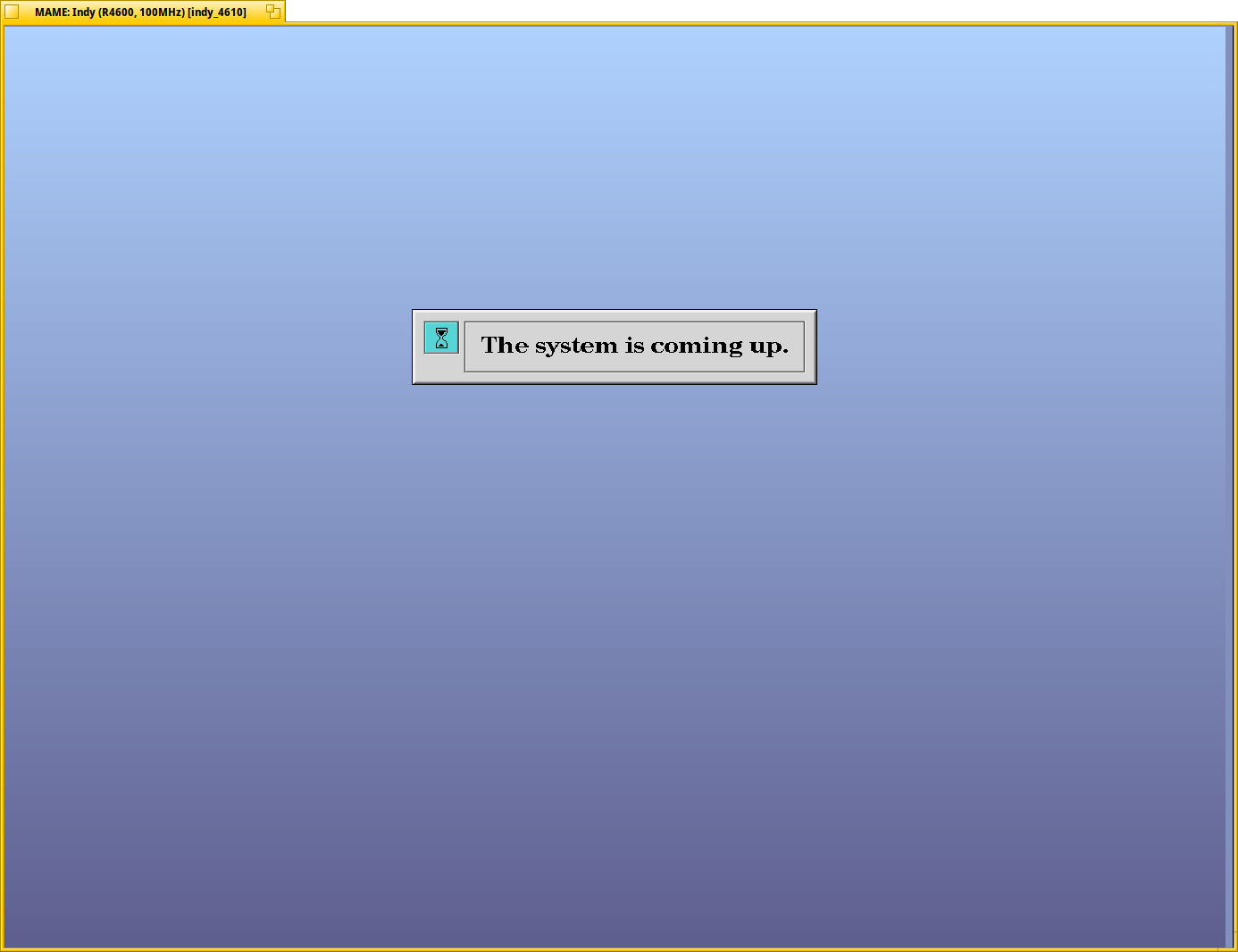 A warning pops up telling us we are using standalone MAC adress, so networking won’t be available: 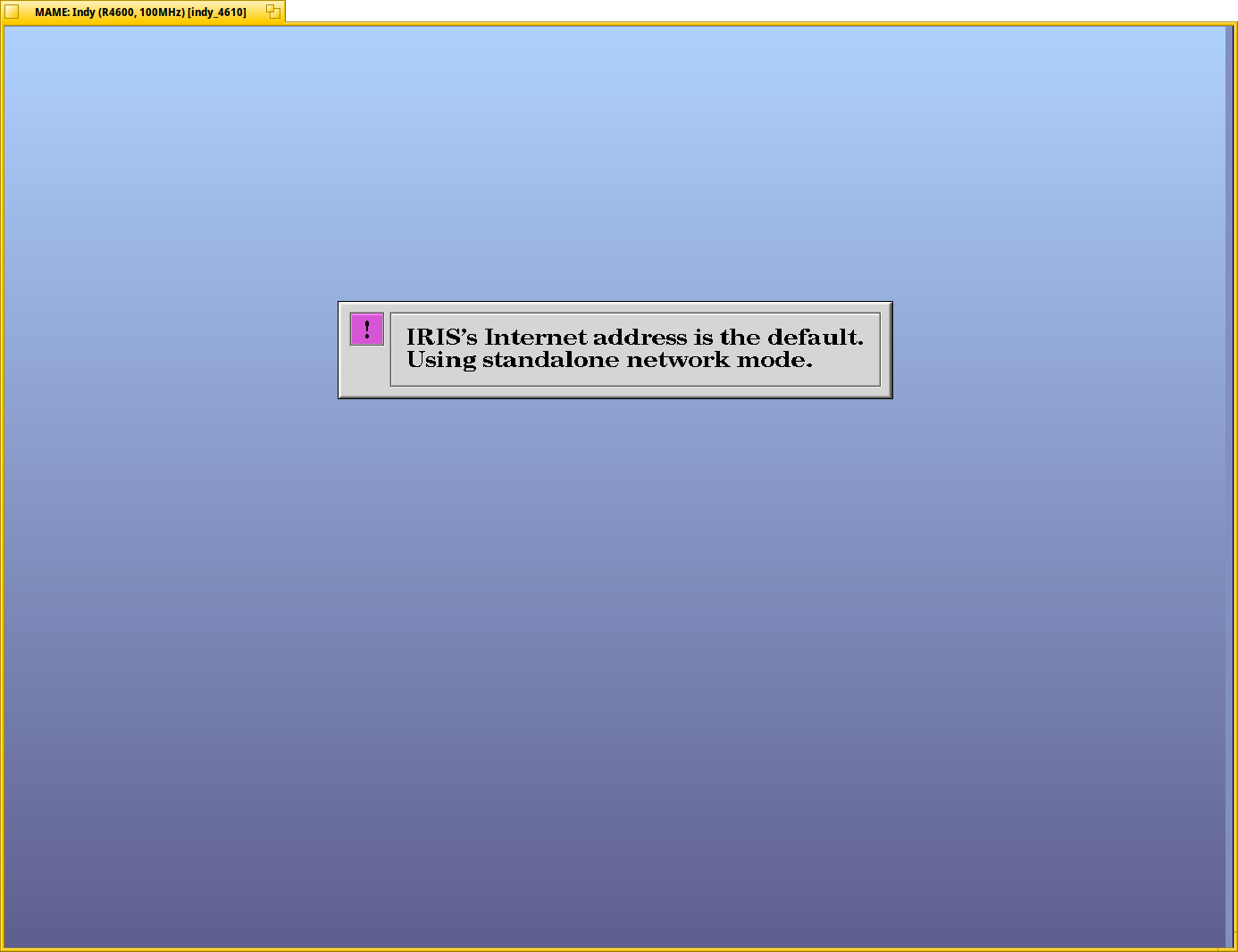 Then we get some errors and warnings: 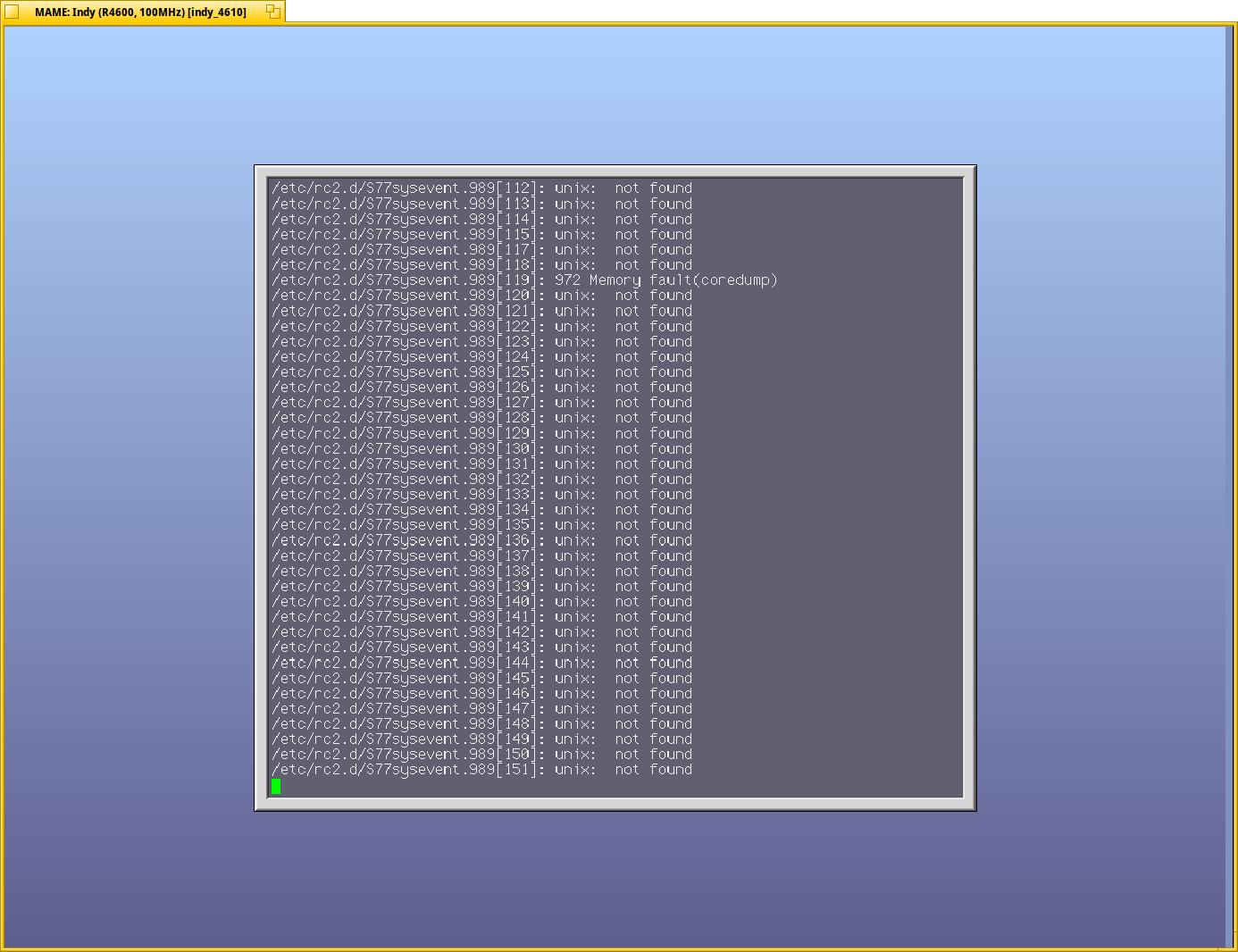 But ultimately we wil be greeted by the login manager: 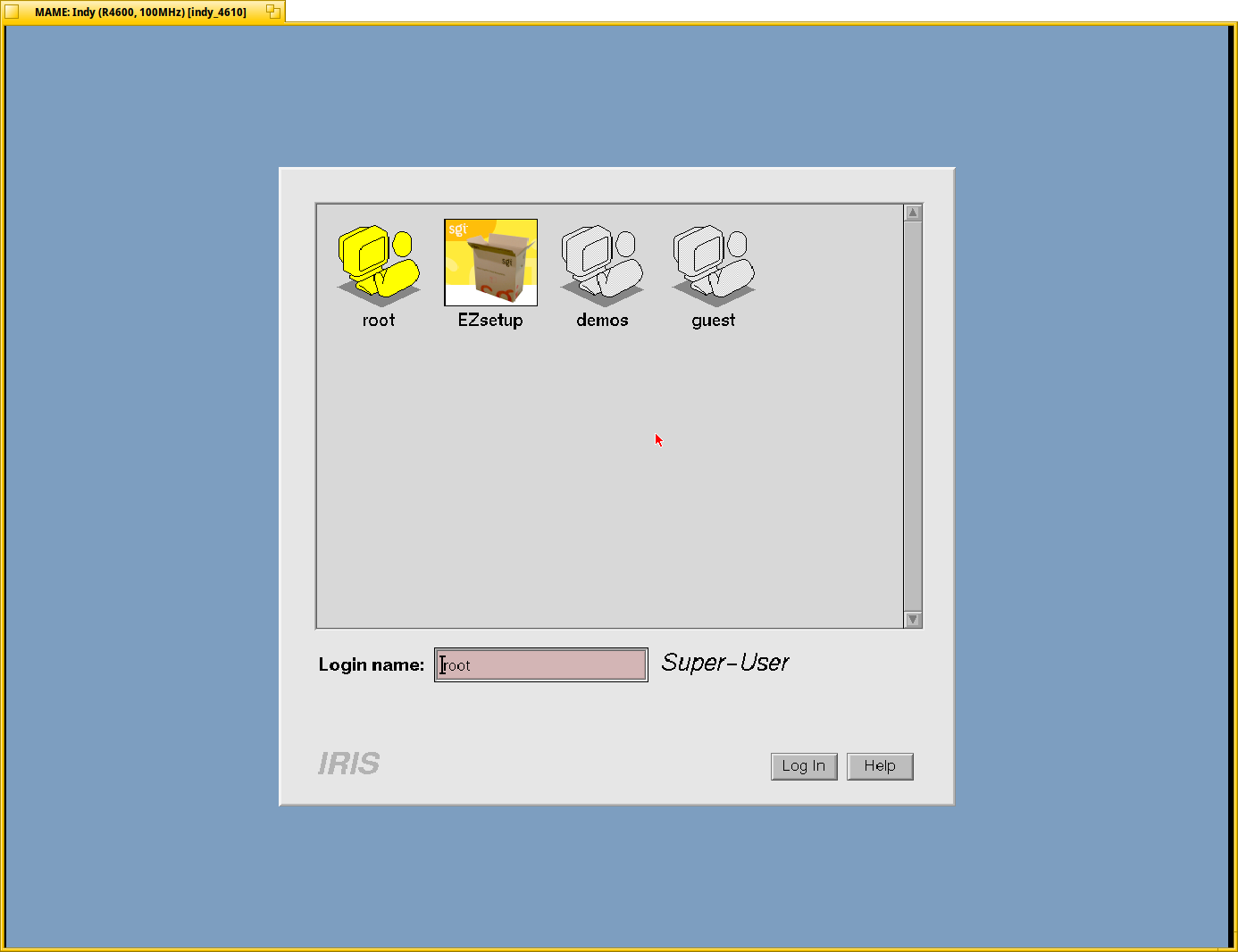 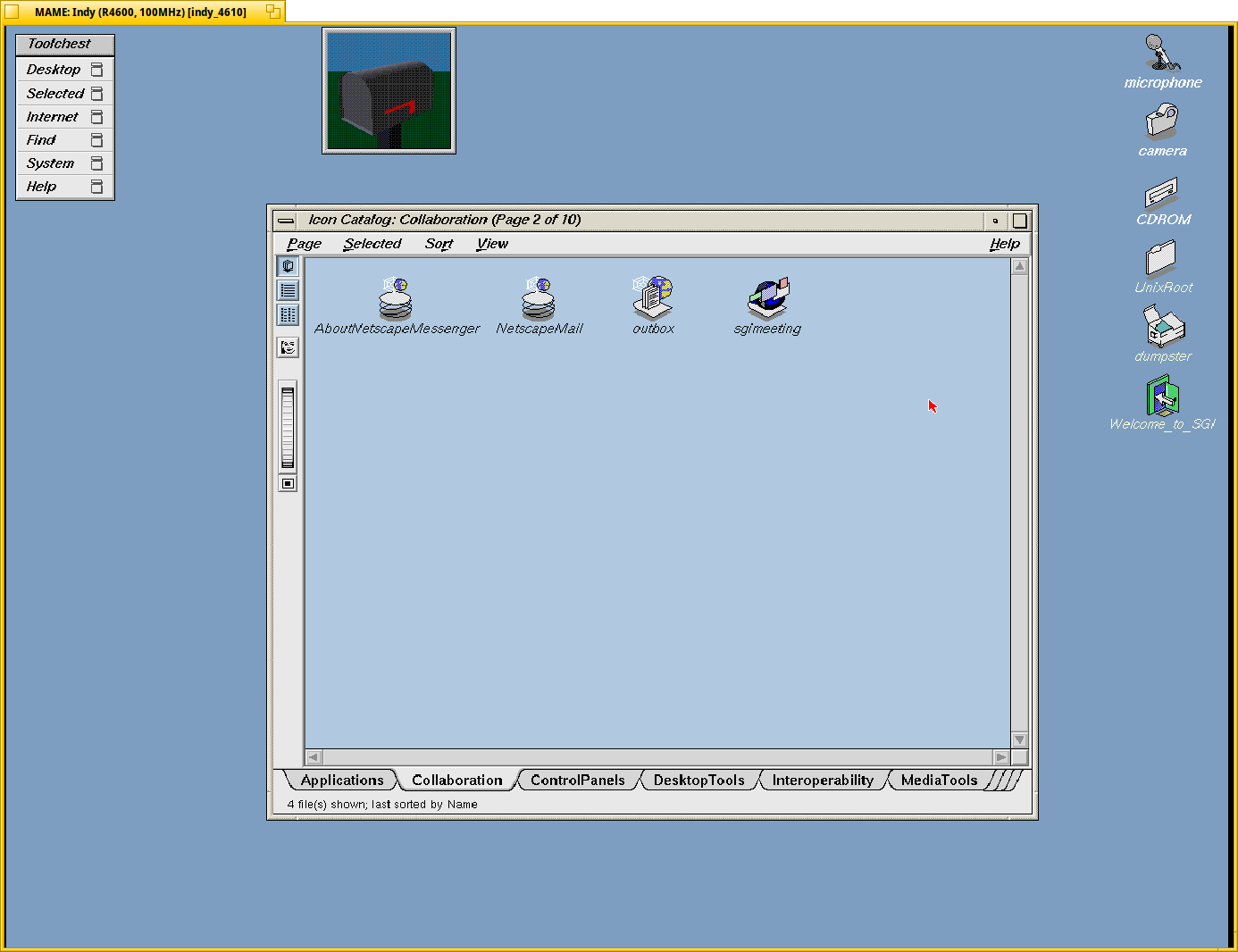 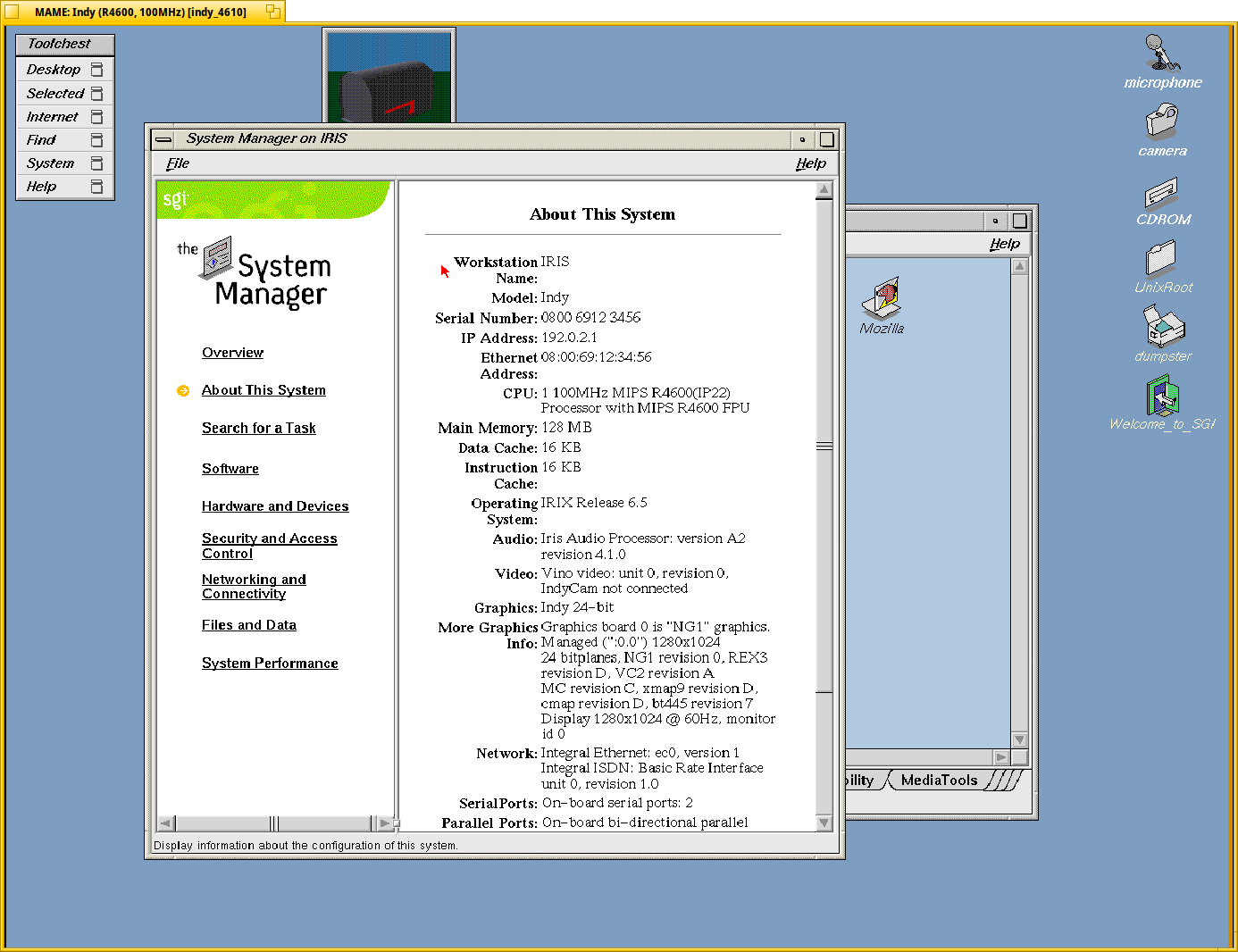 We can “emulate” webbrowsing with Netscape and local webpages: 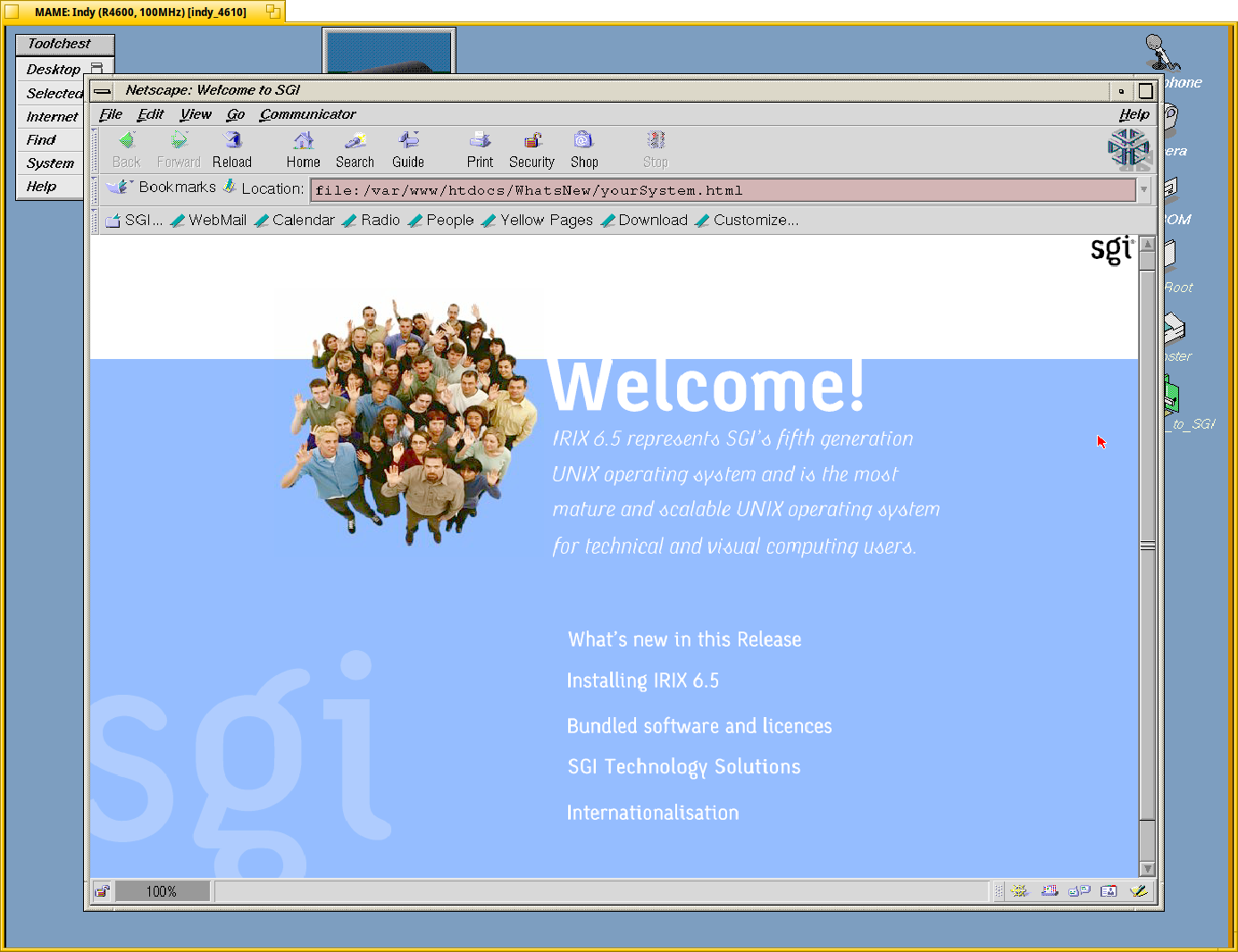 The disk image is just a vanilla install, so there is no much to see, but one could mount cd images and instal additional software.